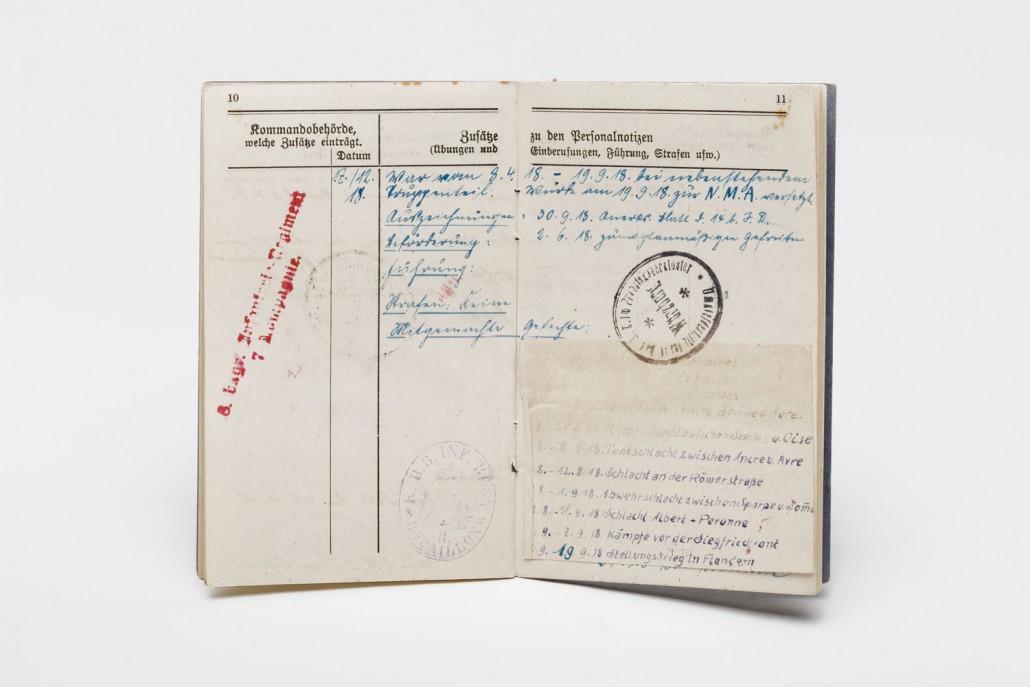 Every German soldier had two documents describing his military career. His military service book (Militärpass) and his paybook (Soldbuch) were written up by the soldier’s unit. The Soldbuch was kept by the soldier whereas the Militärpass remained with the company’s secretariat. It contained all the main details of his military career – his rank, surname, given name, names of wife and parents, civil status, profession, religion, unit, serial number and notes on the campaigns in which he fought. By reading the document, one could see a man’s military career.

This Militärpass describes the military career of Andreas Muck, a Bavarian born in Kitzingen. It indicates that he was mobilised on 9 October 1914 and sent as part of the reinforcements on 22 February 1915 (after the regiment had taken part in a particularly difficult battle on the ridge at Les Éparges from 17 to 21 February 1915). The 8th Bavarian Regiment then went to Verdun. At the end of August 1916, the regiment reached the Vaux-Chapitre Wood and held the sector until 10 October 1916. Andreas Muck received the Iron Cross, 2nd Class on 10 December 1916 and the Bayerisches Militärverdienstkreuz 3. Klasse (Bavarian Military Merit Cross, 3rd class) on 18 February 1918. He survived the war.

This Militärpass can be seen at the beginning of the visit, in the area entitled, “Who were the soldiers in Verdun?”