Home / Events / Temporary Exhibition / 7 million ! Soldiers who were prisoners in the Great War

You are here: Home / Events / 7 million ! Soldiers who were prisoners in the Great War 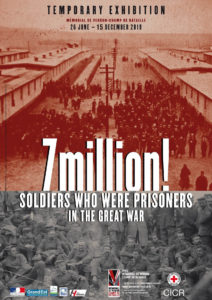 As part of its programme of twice-yearly temporary exhibitions, the Verdun Memorial, in partnership with the International Committee of the Red Cross (ICRC), has chosen this year to put the spotlight on the soldiers who were captured during the First World War, a hundred years after many of them came home. The exhibition, which is entitled “7 million! Soldiers who were prisoners in the Great War”, looks at what happened to these men: their journey to the country where they were held captive, life at a camp, the places where they worked, and then their return home…

In many respects, the phenomenon of captivity went through completely unprecedented changes during the Great War. Due to the extraordinary swelling of the sizes of armies, the numbers of soldiers held in captivity rose considerably. According to some estimates, approximately 6.6 million soldiers were captured during the Great War. The Germans alone held 2.5 million men captive in 1918. Because every family affected by the captivity of one of its members was concerned about them, prisoners quickly became not only a human issue but also a political issue for the warring countries, which changed the way they treated each other’s prisoners under a system of constant reciprocity.

Their economic importance also became vital: prisoners were ready and valuable workforces in countries deprived of young men who had left for the battlefields. They were also a particularly vulnerable population in the eyes of humanitarian organisations such as the ICRC, the National Committees of the Red Cross and the International Prisoners of War Agency, which spared no effort in helping them. All over the world, envoys from neutral countries or various organisations visited camps. At the ICRC’s instigation, prisoner swaps and the internment of thousands of prisoners in neutral countries were arranged. But most prisoners had to wait until the end of the conflict before they could finally return to their home countries, which had in some cases been radically shaken up and transformed.

The tour describes the places that prisoners ended up in one by one, from the time when they were captured to the end of the war. Visitors initially walk through four areas: they follow the route taken by a prisoner to the place where he was held captive, learn about life at a camp and the place where prisoners worked, briefly escape to see the places where the cause of prisoners was championed and supported, and then finally resume the tour and continue to the homecoming.

Projections, photographs and personal and public archive records punctuate the tour route featuring a hundred and fifty items from the Verdun Memorial’s collection, the ICRC’s archives, partner museums and private collections. Personal accounts, artists’ works and remarkable and authentic sound recordings are showcased in a display that is in keeping with the very embodied approach that the Verdun Memorial now takes.

This exhibition staged in partnership with the ICRC will be extended by a presentation of the ICRC’s work in relation to prisoners from the time of its creation to the present day in a fifth area.