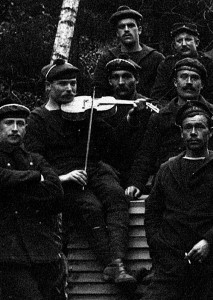 Using their own professional instruments or others made by the soldiers themselves, with texts and images projected onto a screen, Claude Ribouillault, Emmanuel Pariselle, Luc Weiss and their puppet give an emotional description of the resources used by soldiers to express the realities of their everyday lives. “It’s a fiddle!” is a show full of creativity, fun and irony, as if cocking a snook at the circumstances!

The event is free but online booking is required before Friday 17 June at 8pm.

Extracts from the concert Violon bidon ! performed by Claude Ribouillault and his band, at the Verdun Memorial Museum, 18 June 2016.