You are here: Home / Events / The Cello of war, Maurice Maréchal and Le Poilu

The Cello of war, Maurice Maréchal and Le Poilu

Emmanuelle Bertrand pays homage to her illustrious “grandfather of the cello”, Maurice Maréchal, with Christophe Malavoy. Together, they recount the unusual story of his wartime cello “Le Poilu” – the nickname given to French soldiers in WW1. The miraculous sound of this instrument, faithfully reproduced by lute-maker Jean-Louis Prochasson, appears from the past to share its story and that of the young soldier who was to become one of the greatest cellists of his time. Emmanuelle Bertrand plays two instruments by Jean-Louis Prochasson, the Gevrey Chambertin, a cello made in 1995, and a facsimile of Le Poilu made in 2011. 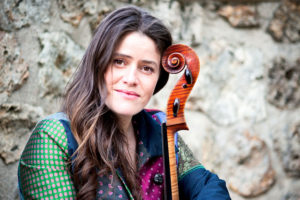 A graduate of the Conservatoires Supérieurs in Lyon and Paris, Emmanuelle Bertrand has won numerous international competitions. It was a Victoire de la Musique award that brought her to public attention in 2002. As a soloist, she plays in leading national and international orchestras. With a passion for chamber music, fifteen years ago she formed a duo with pianist Pascal Amoyel, with whom she explores lesser known works as well as the standard repertoire. Emmanuelle Bertrand devotes part of her time to teaching chamber music at the Conservatoire National Supérieur in Paris, and the cello at the Conservatoire in Gennevilliers, along with international masterclasses. Voted Artist of the Year 2011 by the magazine Diapason and the listeners of France Musique, she is the artistic director of the Beauvais Cello Festival and a patron of the Estival de la Bâtie in the Loire. She also spends time writing and creating works and shows such as the Cello of war (Violoncelle de guerre) in homage to Maurice Maréchal.

Christophe Malavoy is an actor, producer, director and writer. Winner of a César award for most promising actor 1982 and the Jean Gabin prize 1985, and several-times nominee for the best actor César, Christophe Malavoy has acted in around thirty films for the cinema (including Death in a French Garden [Péril en la demeure] by Michel Deville, Engagements of the Heart [De guerre lasse] by Robert Enrico, Madame Bovary by Claude Chabrol, The Woman of my Life [La femme de ma vie] by Régis Wargnier and Association of wrongdoers [Association de malfaiteurs] by Claude Zidi). He has appeared in around forty films for television and in several mini-series. In the theatre, he has acted in some fifty plays, including The Fire that Burns [La ville dont le prince est un enfant] by Montherlant, D’Artagnan by Jérôme Savary, The Day of Destiny [Le jour du destin] by Michel del Castillo, and more recently Gary/Ajar, which he wrote, directed and acted in and for which he received a Molière nomination in 2009. As a director, he has produced three full-length films, including Free Zone [Zone libre] that he adapted from a work by Jean-Claude Grumberg. He has also written several books including Parmi tant d’autres published by Flammarion and an intimate portrait of Louis-Ferdinand Céline, Céline même pas mort !… published by Balland.

This concert-reading is presented as part of European Museum Night 2018: Maurice Maréchal, cellist and soldier at Verdun.

Screening of the film Cello in the Trenches by Christian Leblé

No tickets left for this event.

Cello in the trenches