A simple sandbag made of hessian closed with a piece of rope, leather and cloth straps, the grenade bag nonetheless illustrates the major tactical changes made by the German army, to improve their offensive techniques in trench warfare.
The Stoßtruppen (shock troopers) and the Sturmtruppen, (stormtroopers) were the key players implementing these new combat techniques.

Hung around the neck and placed under the arm, this bag could contain around twenty stick grenades (Stielhandgranaten) on the right, and a few defensive grenades (Kugelhandgranaten) on the left. Its utilisation went hand in hand with the offensive principle of encircling and outflanking the enemy trenches instilled in the assault troops.

The presence of the BA X 1916 stamp means that this object had passed through the uniform depot (Bekleidungsamt, abbreviated “BA”) of the 10th German army corps (the “X” in Roman numerals) which corresponds to the Hanover military region.

Right from the first days of the Verdun offensive in February 1916, the Sturmtruppen, placed in a support position in the Herbebois sector, put their training into practice kitted out with these bags.

A training camp was set up in the spring 1916 in Beuveille, near Longuyon, behind the German lines at Verdun. The purpose of this camp was to teach Sturmtruppen combat techniques to all the units. In total, the assault troops took part in more than seventy attacks launched in 1916 in the Verdun sector.

Purchased in November 2020 by the Comité National du Souvenir de Verdun, owner of the Verdun Memorial’s collections, at the Eurl Aisne Enchères Auction House, this object made of hessian, an organic material made from plant fibres, requires special presentation conditions in order to preserve its integrity. Its relative moisture level must be maintained between 45 and 55% to prevent mould developing. Likewise, a temperature of about 20°C is required to avoid an infestation with the propagation of insects such as dermestids and silverfish. To limit the formation of creases, which would weaken the fabric, the bag has to be displayed on a base and stuffed with tissue paper to keep its shape. It must only come into contact with chemically neutral and stable materials to avoid any risk of deterioration.

Inscription: BA X / 1916
Technique: hessian, leather
Dimensions: 30 x 82 cm (l x h)
Acquisition: purchased in September 2020 by the Comité National du Souvenir de Verdun
Inventory number: this object has not yet been inventoried. The inventory number that will be assigned to it shortly will begin with the year of its arrival in the Verdun Memorial’s collections, that is: 2020. ?. ?

The utilisation of this object went hand in hand with the determination of many German officers, at various ranks, to adapt offensive techniques to the war of positions.

Indeed, since the autumn 1914, the war had turned into an immense siege war with the creation of a network of trenches. Everyone had to adapt and find tactical alternatives.
During the first two years of the war, ad hoc assault detachments, often with around fifty men, were created in certain divisions in order to go on patrol or capture enemy positions. The purpose of these detachments was to mount surprise operations on varying scales, going from simple patrols, to the capture networks of enemy trenches, not to mention surprise attacks. The principles instilled in these Stoßtruppen consisted of encircling and outflanking the enemy’s trenches.

During the year 1915, new support weapons were introduced in certain Stoßtruppen such as accompanying artillery and flame-throwers.

From 1916 onwards, Sturmtruppen taking the form of Sturmabteilungen (assault detachments), then Sturmbataillone (assault battalions), permanent formations distinct from the other units, were put in place.

It was Hauptmann Rohr who was put in charge, in September 1915, of training the first Sturmtruppen detachment: the Sturmabteilung Nr. 5 or Sturmabteilung Rohr.

Rohr adapted his unit to the latest combat techniques developed in 1915 by the different Stoßtruppen, combining mobility and firepower. To achieve this, he had their equipment and weapons lightened, trained his men to use accompanying weapons, such as flame-throwers and grenades.

Although their contribution to the conquest of Hartmannswillerkopf in December 1915 was the Sturmtruppen’s first feat of arms, it was effectively with the Verdun offensive that the use of assault troops truly started to develop.

On 22 February 1916, the Sturmabteilung Nr. 5 attached to the Brandebourg 6. Infanterie-Division (3rd Army Corps) provided support for the attack on the Herbebois sector.

On 1st April 1916, Captain Rohr’s unit was brought up to strength to make it an assault battalion. In addition to its combat missions, the Sturm-Bataillon Nr. 5 also became an instruction unit based in Beuveille, near Longuyon, where officers and NCOs converged from all along the front so that they could in turn pass on these combat techniques to their respective units.

In total, the assault battalion took part in more than seventy attacks in 1916 in the Verdun sector with generally positive results. These successes bear testimony to its successful training and consolidated the reputation of the Sturm-Bataillon Nr. 5, which as a result gained the support of the Kronprinz who considered it his favourite unit. These successes decided the German High Command to increase the strength of the Sturmbataillone by creating other official and unofficial units. 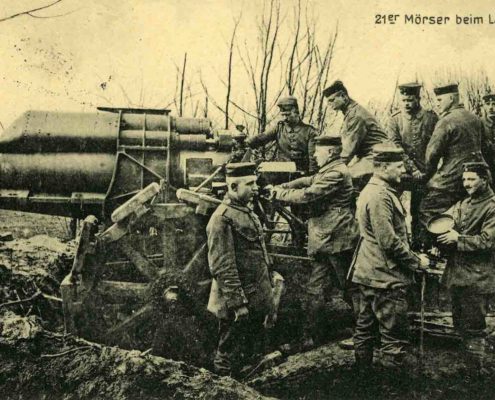 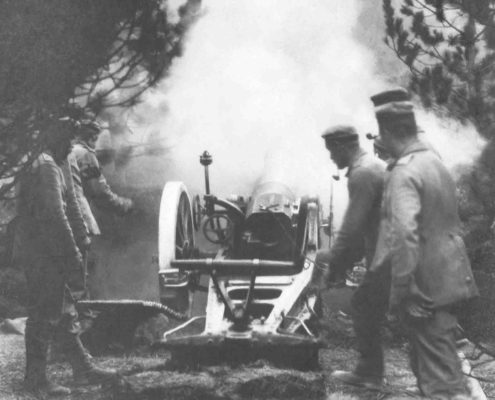 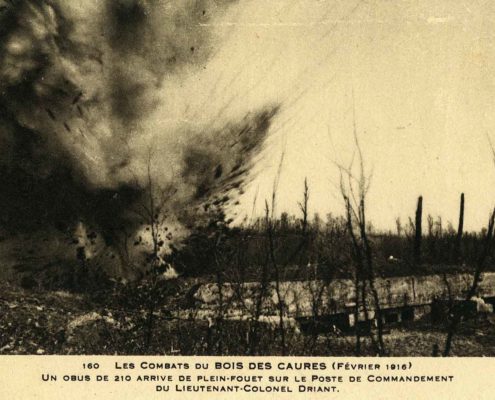 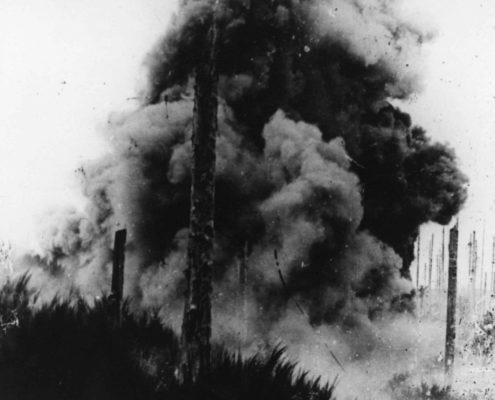 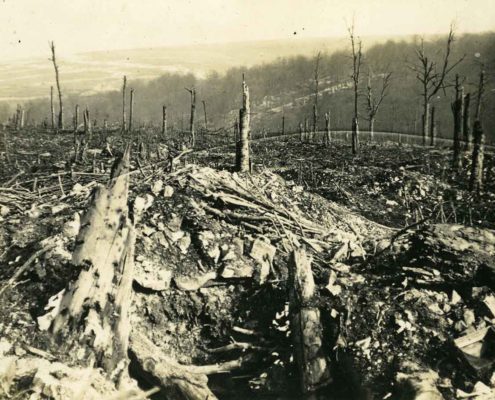 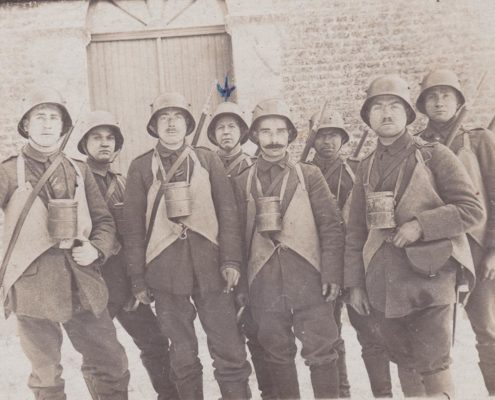 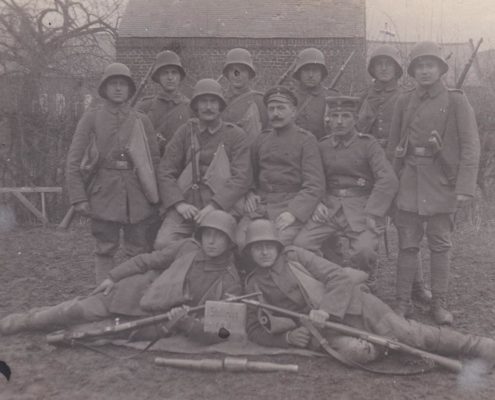 Stosstruppen. The use of grenades is highlighted in this photograph. Photograph, 1917. © Verdun Memorial 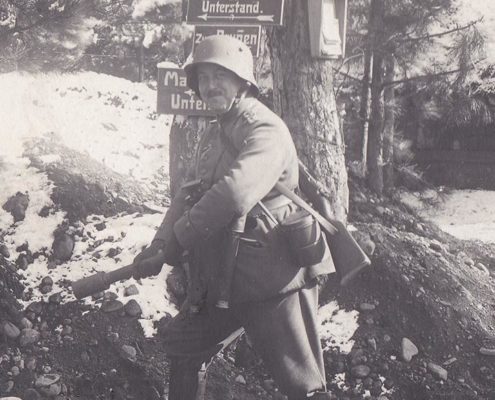 On 21 February 1916: the first day of the battle, at the Verdun Memorial

At dawn on 21 February 1916, a deluge of shells hit a 35-kilometre front around the town of Verdun. The German army’s powerful rapid-fire guns sent hundreds of thousands of shells of all calibres raining down on French defences. Their aim was to obliterate the defences before the infantry attack at 4pm along a front reduced to only a dozen kilometres. Despite the urgent work done under driving rain on the days leading up to the battle, the French defences were cursory at best. Pounded by shelfire, the French troops were disorganised and they suffered heavy losses. Only the sacrifice and resistance of scattered groups of soldiers gained the precious time needed to bring the reserve troops up to the front line.

5 eyewitness to listen to in this museographic space at the Verdun Memorial. From positions 160, 150, 24 and 11 kilometres from Verdun and on the battlefield in Fleury, French soldiers describe the Trommelfeuer, more powerful shelling than anybody had ever seen or heard before.

Beneath the glass panels in the floor is an exhibit depicting the sodden ground in Verdun, littered with German shell casings of various sizes. Ten days of non-stop rain forced the German army to delay its attack. 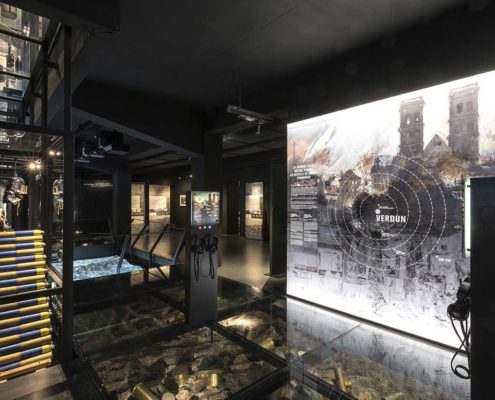 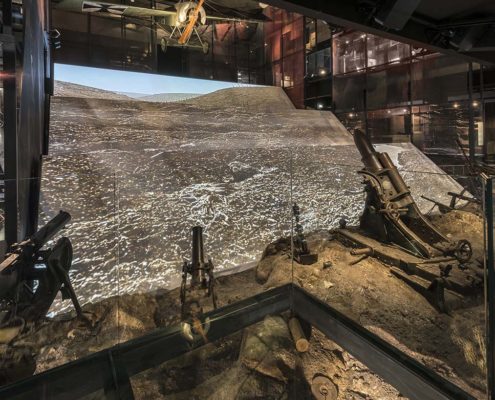 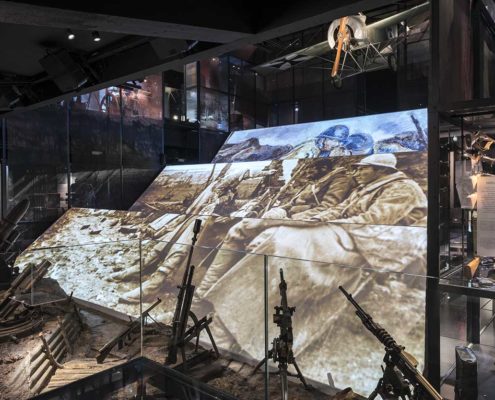