You are here: Home / Learning Resource Centre / The Open-Air Museum

Numerous forts still exist in the area around the museum; they have now been preserved for one hundred years. Even though nature has reclaimed the land it lost, notably the forest that is the dominant feature here, the scars left by the Battle of Verdun remain visible. The Open-Air Museum provides visitors with a chance to see the battlefield from a different angle, by drawing on several different knowledge bases.

Several educational trails begin at the museum or from points nearby. Visit on your own or with a teacher from the Verdun Memorial Museum’s Learning Resource Centre, in addition to a guided tour in the museum. Booking is required.

For more details, see the page The Learning Resource Centre.

Each trail ends with a presentation of the Douaumont Ossuary. 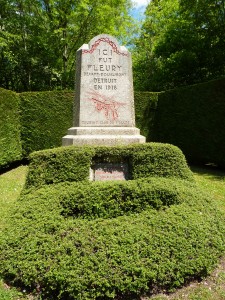 Memorial to the destroyed village of Fleury-devant-Douaumont, 2012. All rights reserved.

The destroyed village of Fleury-devant-Douaumont changed hands sixteen times during the fighting. It was razed to the ground – not a single house or street was left standing. In 1918, Fleury was declared a “village that died for France”. The Mémorial de Verdun was inaugurated there in 1967, on the site of the former railway station. 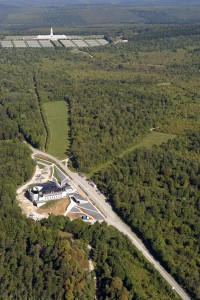 The Memorial stands in the heart of the “Exceptional Forest”, with the Douaumont Ossuary in the background. Photo: Jean-Luc Kaluzko, 2015.

Fort Froideterre, although little known to the general public, played a crucial role in the defence of Verdun. Built of reinforced concrete, it contained quarters for approximately one hundred soldiers and was equipped with various defensive features (observation domes, machine guns, 75 mm gun turret). This concrete gun turret provided significant firepower, which helped to repulse a German attack on 23 June 1916.

Organising a school trip to Verdun

You can organise your own trip for you and your pupils or use the services of a tour operator to help you plan the outing.

Teachers plan their own itineraries to include their own choice of battlefield sites. They organise their own timetables and provide the commentaries themselves.