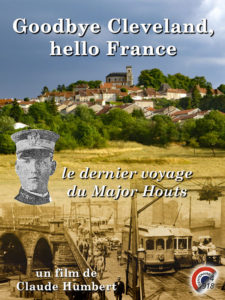 Like many American soldiers, Major Houts took part in the Meuse-Argonne offensive on 26 September 1918. He died on the fourth day of the offensive. Claude Humbert, a native of Lorraine and World War I enthusiast, came into possession of his soldier’s trunk. This personal object inspired him to produce this remarkable documentary, retracing the steps of this American officer from his home town to the Meuse battlefront.

“September 2015. Here we are in Euclid on the banks of Lake Erie. It is unusual to find French visitors in this small town in Ohio. What brought us here is an American soldier, Major Arthur Houts, who lived here with his wife and son. Major Houts was among the two million men of the American Expeditionary Forces who set sail for France in 1918. By chance, over time his trunk changed hands and came into my great-aunt’s possession and then mine. After lengthy research, I managed to trace his journey between Cleveland Ohio and Montfaucon d’Argonne in the Meuse. For a long time, I dreamt of retracing his footsteps and finally did so. We covered the French section in Spring 2015 and the American section in September 2015. Each step of the way, we looked for anything that could bear witness to the journey of Major Houts (contemporary buildings, monuments, museums). This film recounts our journey in the footsteps of Major Houts.” Claude Humbert, director. 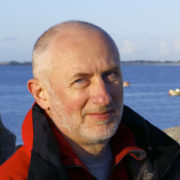 Born in Longwy (Meurthe-et-Moselle), Claude Humbert grew up in the north of Lorraine. Living close to Verdun, he was interested in the First World War from an early age.
He has filmed reports on various countries around the world. His film Around the World in Eighty Volcanoes (Tour du monde en quatre-vingts volcans) has been shown at conferences, in cultural centres, cinemas, festivals and schools. Claude Humbert is a regular contributor to the Globe-Trotters Magazine, and his photographs of volcanoes have appeared in Chasseurs de volcans. His first film on the First World War, René Humbert, instituteur et soldat de la Grande Guerre, recounts the life of his grandfather, before, during and after the war.