Philippe Brandeis, organist at the Invalides Cathedral, will pay a particularly moving homage to Belgian, German, French, American and British composers who suffered as a result of the war or died at the Front. Christmas Prelude by the young Australian Olympic champion and composer F.S. Kelly will be performed a few days before the centenary of his disappearance on the Somme (16 November 1916). 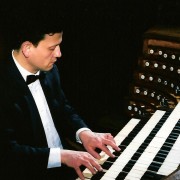